A week after my visit to South Korea for Jakarta Sister City Youth Program, it’s a coincidence for me to be transit again in this city since I was using a Korean airline at that time. I was still in the nostalgic feeling for South Korea.
Transit for long hours can be a little bit boring, unless the airport has entertainment.

We crossed by Incheon Bridge. Since it’s snow and everyone is perhaps inside their homes trying to make themselves warm, it feels like it’s an inhibited city. The temperature was -8 Degrees Celsius.

The view of Songdo city from Heungryunsa Temple

Thanks to this tour, I got to experience my first snow!

Went through Incheon Grand Bridge, the bridge that connects between Yeongjong Island and the mainland of Incheon. Yeongjong Island itself is where Incheon International Airport. Aside of the airport, it also has small villages, farms, and beaches.

We can see some parts of the water were already frozen

Seeing Incheon city along the way

Incheon Landing Operation Memorial Hall is a war memorial hall as tribute to Korean soldiers.
Its theme centers on the successful Incheon Landing Operation led by UN Commander in Chief General McArthur during the Korean War. Inside the building, there arephotos showing what life was like back then. Until displays of weaponry used over the years in the defense of South Korea during the war.
They have some great info and a film to watch, that is possible to see if you have extra time, since the transit tour was packed and things needed to be done on time.
Outside, there’s is an 18 meter-long memorial tower and the national flags of the sixteen countries that participated in the Korean War.
Overall, this place is good for a short visit.

What’s funnier than learning about the history of the war in Incheon Korean War Memorial Museum, is encountering Union Soviet soldiers in front of the museum right after we’ve discussed about the past war and how Union Soviet was the enemy during the war times. Apparently, the soldiers were also currently visiting the museum for observation
“See? The world is on its way to peace!” the tour guide said.

– Incheon Metropolitan City Museum – a museum to see a glance history of Incheon city. We have our tour guide explain to us in English, but captions in the museum include Korean and English.
– Wolmi Traditional Garden – a park now that some of the unique collection of flowers in its garden, including Traditional Garden Section, a home to a variety of gardens patterned after those of the past. Aside being an eco themed park, it has also showcases Bukchon (traditional Korean village) and other cultural sightseeings.

After getting outside from the arrival area, before proceeding to the immigration, you can see the nearest Korean Transit Tour information center from your gate. Shuttle and guide are all free from the airport. You can be using any airline available, as long as you are transit in South Korea. 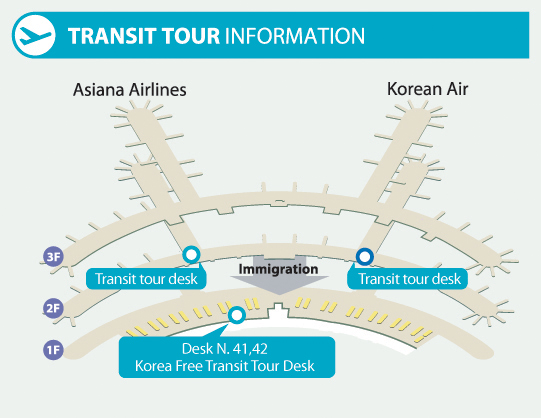 Where you can Korea Transit Tour desk on Incheon airport (source: http://tong.visitkorea.or.kr/)

You can check out the list of transit tour here from Korean Air’s official website: https://www.koreanair.com/global/en/offers-promotion/excellent-transit-program/transit-tours-schedule.html
The schedule actually varies a lot from what’s displayed there. So here’s the copy of a recent physical brochure I have from the airport (Per February, 2017)

I really did enjoy my transit experience, gives me a reason to consider transit in South Korea wouldn’t be a problem!
Cheers,
@sabrinaanggraini

Living with a Korean Family in Incheon, South Korea

4 Types of People That Will Love Myeongdong

Living with a Korean Family in Incheon, South Korea

4 Types of People That Will Love Myeongdong

ABOUT THE CLASSIC WANDERER


The Classic Wanderer is a travel and adventure blog by Sabrina Anggraini. From exploring new culture, getting lost in nature, till your casual travel guides.

Because traveling is not only about having fun, but also to open your perspective, enhance your understanding of the world, and turn you into a better version of yourself.